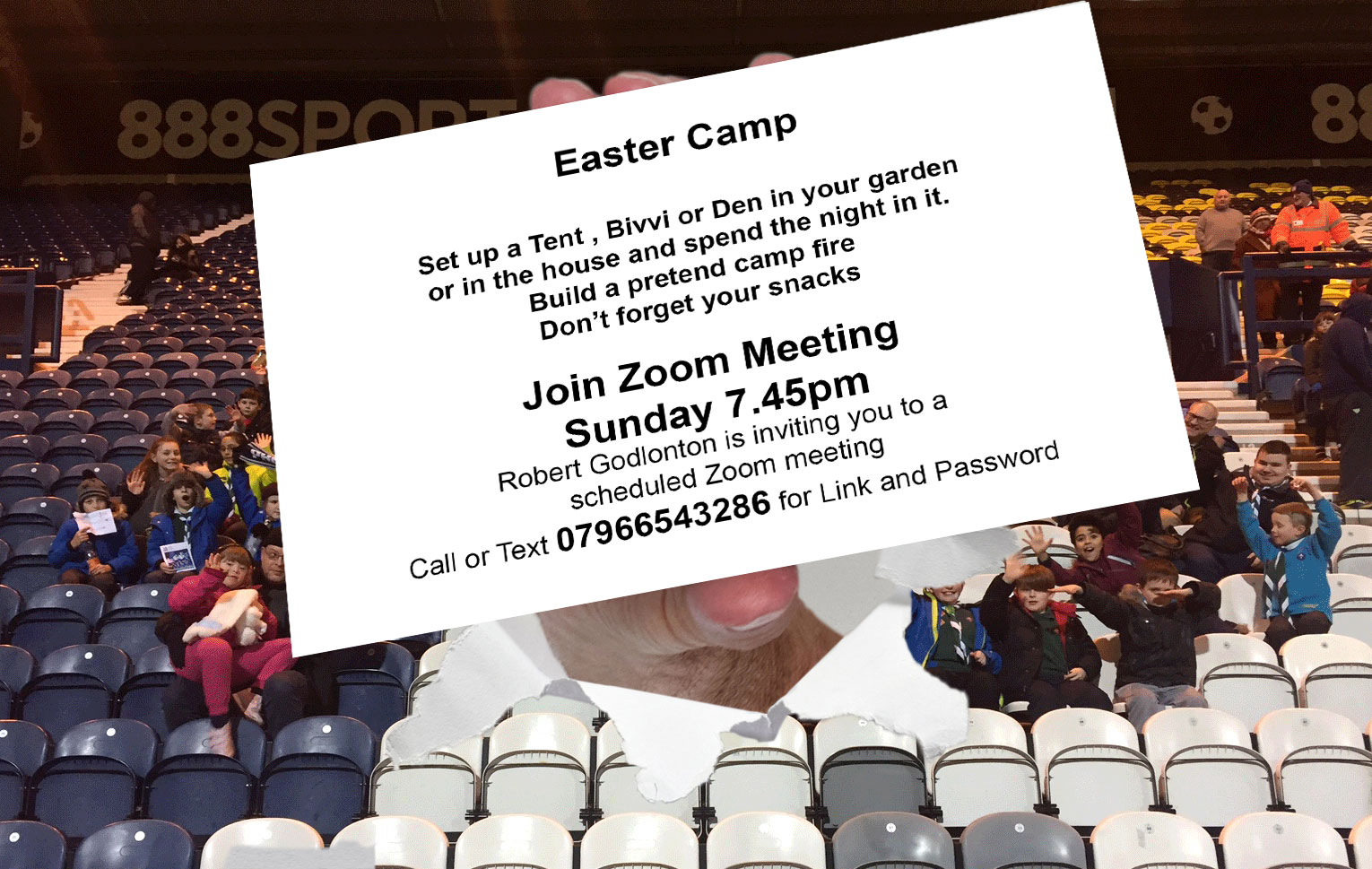 The Beaver leaders are as follows:

Kipling. The cubs meet in a group called a Pack (as in a pack of wolves). The leader of the Cub Scouts section is called 'Akela' and the other leaders may take Jungle Book names such as Bagheera, Baloo, Kaa, Mowgli, Chil, Hathi, Raksha, Ramea and Shere Khan.

The Cub leaders are as follows:

At the beginning and end of each pack the Cubs hold a type of ceremony called 'Grand Howl' as well as flag break/flag down.

As a Cub you will be placed into a pack. The packs are organised into Sixes. Each six has their own colour and the Cubs in that six wear a woggle of the colour on their neckerchief (scarf). Each six is made up of approx 6 Cubs of varying ages. New Cubs will usually be put into a six where they know at least on other Cub.

Each six has a 'Sixer' who is in charge of the six. He/She is helped by a 'Seconder'. A Cub is not usually made up to a Seconder or Sixer unless they have shown their competence & good behaviour.

As a Cub Scout you will be able to enjoy all sorts of things.

you will make things

do lots of exciting things and work for badges

and get the chance to go on visits and camps

Scouting has a fascinating history that has given us many traditions.

In the words of Baden-Powell 'The Scout Badge is the arrowhead which shows the North on a map or on a compass. It is the badge of the Scout because it points in the right direction, upwards. It shows the way in doing your duty and helping others. The three points of it remind you of the three points of the Scout Promise - duty to self, others and God'

The Scout Sign is used when Members make or reaffirm the Promise.

When the Zulu chief, Dinizulu first met Baden-Powell, he greeted Baden-Powell by shaking his left hand. Dinizulu explained that by laying down the protective shield he carried in his left hand, he trusted his new friend.

The Scout Motto is a reminder that all Scouts must be always be ready to do their duty, whether to God, others or themselves. Scouts should always be ready for any eventuality, especially in helping others.

Nearly every Scout in the world wears the purple World Membership Badge. The Scout scarf is another symbol that lets people know you are a Scout. This also identifies the pack to which you belong.

The Scout leaders are as follows:

A little bit of History

Our group opened on Thursday 10th September, 1931. The first members were the non college boys withdrawn from the 16th Preston (Loyola) troop Catholic college. We were based at the then English Martyrs 'boys' school yard in a hut 60 feet by 20 specially built by Messrs Pius Baines and Sons. A year later, the hut was moved to a plot of land on Leighton Street, next to the canal, October, 1932. A month later, the 46th Preston (notre-dame) Wolf Cubs started on Tuesday, 29th November, 1932.

During the war, many of the group members joined up and records show 46th Preston Scouts, James Cairns and Douglas Rudd on the 1939-45 roll of honour RIP.

The group has moved locations a number of times in Preston including a Mill on Meadow Street, St. Ignatious social rooms and school, St. Walburge's social rooms and in 1968 we were welcomed by Fr. Sowerby and made our home at Sacred Heart Parish Ashton, in the school on Poulton Street then Marion House and most recently, the Community Centre on Beech Grove.

We are currently recruiting young people and adults alike, to join us in our highly active group. We have a great team of enthusiastic leaders with over 100 years experience between us.

Scouting is an international, uniformed, youth movement. It is divided into several main sections

The aims of Scouting are clearly stated but can be basically surmised as providing an opportunity for young people to develop, to learn and to enjoy themselves. Scouting can offer a wide range of skills and services and is open to any young person of any creed colour, religion, mental or physical capabilities and of any sex.

All scouting sections rely upon a progressive 'training' scheme in the form of badges to track the progress of the scouts and to give a feeling of achievement. There are two main types of badges, The 'Award' badges and the 'Activities' badges. They vary from section to section. The Award badges are designed to provide the basic set of activities and training to be completed. These cover the basics of all types of work, and the important necessary Scouting skills. The Activity badges provide the option to take a certain activity or hobby in greater detail.

History and Traditions of Scouting

Lord Baden-Powell and the birth of Scouting.

As a boy, Baden-Powell enjoyed the outdoor life and often went fishing, boating and camping. After attending Rose Hill School in Tunbridge Wells, he gained a scholarship to Chaterhouse School in Godalming in Surrey. Although he was a talented artist, he was not very keen on schoolwork. However, he did pass the necessary exams to become a young Cavalry Officer in the British Army and saw service at home and in India, Afghanistan and Africa.

The Siege Of Mafeking

It was in South Africa, between 1899 and 1900 during the Boer war, that Baden-Powell found himself in charge of a small number of soldiers who were charged with defending a town called Mafeking against a much larger number of Boer troops.

During the siege, many people back home in Britain came to hear stories of Baden-Powell's bravery and ideas, When he returned, he was welcomed as a hero.

Just before the siege of Mafeking, Baden-Powell wrote a book called Aids to Scouting. In it he described the training that he used in the Army. Unexpectedly many boys bought the book and enjoyed trying the activities in it for themselves.

Following the success of Aids to Scouting, Baden-Powell organised a camp on Brownsea Island in Poole Harbour, Dorset in 1907. Here, he tried all types of activities for the boys, including games, sports, swimming, boating, exploring, fire lighting and camping.

Baden-Powell collected together the ideas that he used at this camp in a book called Scouting for Boys. The book was published in six fortnightly parts. It proved to be a great success and soon boys all over Britain were organising themselves into groups of 'Boy Scouts'. The first official Scout Camp was held at Humshaugh, Northumberland in 1908.

In 1914 there was an experimental scheme for Wolf Cubs or Young Scouts as they were sometimes called. In 1916 the wolf cubs Handbook was published. On 16 December 1916 Wolf Cubs was officially formed.

In 1910 Baden-Powell started Girl Guides. This was originally run by his sister Agnes and then later by his wife Olave Soames.

An early part of the Scouting phenomenon saw huge gatherings of Scouts from around the world. These Jamborees - as Baden-Powell named them - were intended to promote the international understanding and world peace, and to give an opportunity for Scouts to exchange ideas and make new friends. The first Jamboree was held at Olympia in London in 1920.

PLOT is the Parent Leaders Organisation Team, made up of the Group Scout Leader, Individual Section Leaders and the Executive Committee (a legal requirement of the Scouting Organisation) of Chairman, Treasurer and Secretary.

Our aim is to provide a safe environment in which young people can have fun and adventure while learning some useful practical skills and socially rewarding behaviour such as respect, courtesy, responsibility, honesty and courage.

We are always looking for parent volunteers who can bring their own skills to the advantage of the youngsters and will happily receive suggestions and ideas.

It would also be extremely usefull if all parents would complete the CRB form (so that you can accompany your children on family camping trips) and the GiftAid form which channels some of your already-paid tax back for the benefit of the children.